In the Teddy Bear Field Goal event, Anthony Cuy Hoang and Peter Phi Hoang were expected to easily beat the rest of the field. Yet surprisingly, Yvonne Hoang and Hiep Hoang Pham came out on top with kicks reaching the top of the stairs!

Winnie Hoang-Kwan continued her consistent scoring. Never ranking in first place in any event, but always in contention.

Anthony Cuy Hoang showed off his impressive strength in his index finger by winning the Paper Football Kicking event. This should be come as a surprise since Anthony Cuy Hoang can lift 5 luggages all at once! But the story of the day has to be the last paper kick by Dan Hoang-Golembeski. He needed to best Anthony Cuy Hoang in the event to tie for first place overall. But in his final kick, his paper football fell just inches short. Thus, allowing Philip Phu Hoang to win the inaugural event outright.

LeHai Hoang and Y Hoang had a tough time judging the audition tapes. For some odd reason, they deducted points from Anthony Cuy Hoang‘s audition tape. There is speculation that bribing was involved in the judging. After all, this is part of Vietnamese culture.

MILPITAS – Susan Delly Hoang surprised everyone with her perfect score on the Ladder Ball event. After three events, Susan Delly Hoang lead all contenders. Her ranking would have been higher had it not been for an errant pass by Anthony Hoang in the Quicksand Football event. However, Phu Philip Hoang‘s 2nd best time in the obstacle course catapulted him to the top rank in the outdoor events.

In the Frisbee event, Nicholas Hoang and Sharon Luong Hoang showed why the North Carolina area is a hotbed for Ultimate talent. Nicholas Hoang had the best time of 7 seconds.

Peter Phi Hoang used his Christmas gift to his advantage as he finished 2nd place in Ladder ball.

First round draft pick Ian Hoang was impressive in the demonstration event, the 40-yard dash. In heats against Y Hoang, Anthony Hoang, Nicholas Hoang and Philip Hoang, he finished the final heat in 1st place. The rookie ran the 40-yard dash in 10.45 seconds. His time is comparable to the runningbacks in the NFL combine. 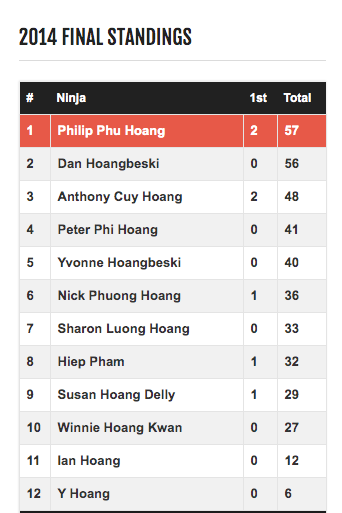